Cris Tales What Is Release Date, Gameplay And More Cris Tales is an upcoming video game that has been developed by Dreams Incorporated & SYCK and published by Modus Games. Cris Tales is a classical game where gamers can experience the present, past, and future together on screen. It is an RPG game.

The game turn-based role-playing game with beautiful 2D art and time-altering mechanics. The choices made by players will affect both the present and future timelines. The game is also going to have more than twenty hours of gameplay.

If we talk about giant gaming industries, then we take big names like Ubisoft, Activision, Electronic Arts, and more, but here is a new growing gaming company Modus. Modus is the fastest video game publisher in the world.

Cris Tales is a work of Modus Games.

What is in Cris Tales?

Cris Tales is not an ordinary game, and it is a game with different adventures and different experiences. Modus Games publishers have made time-travel experience more impressive with this game.

In Cris, Tales time-travel is not just a narrative framing device while time-travel is an integral component to exploration and combat. The Combats of this game are unforgettable.

In this game every single interaction or action is affected by time travel, present, past and future will be over the same screen.

Features of the game- Gameplay, Storyline 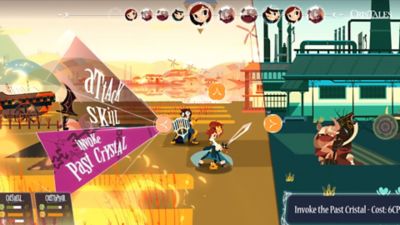 The game has been described as a love letter to the classic JRPGs that inspired it like Chrono Trigger, Final Fantasy VI, Valkyrie Profile, Bravely Default, and Persona 5.

The game will allow players to recruit a team with unique players, challenging enemies, and explore the expansive world. The latest gameplay technology will enable players to explore their surroundings without limits.

The game will give the players characters the ability to peek into the past, alter the future, and decide the right actions in the present to change the course of the future.

The game will feature strategic turn-based combat – warp enemies into the past or future, synchronize attacks for enhanced group abilities, and master the timing of offence and defence to go beyond the respective player’s party’s limits in combat.

The protagonist of the game is Time Mage Crisbell, who embarks on a journey to stop the Time Empress and prevent a grim future.

The game is currently scheduled to release on November 17, 2020. The platforms that the game will be available is on PC, PlayStation 4, Xbox One, Switch, and Stadia. PlayStation 5 and Xbox Series X versions have also been planned.